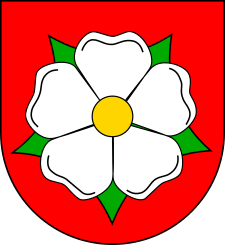 The history of Landštejn begins – at the latest – after 1222, when a Moravian margrave called Vladislav (Wladislaus) died and the administration of this part of the country was taken over by the King of Bohemia, Přemysl Otakar (Przemysl Ottokar) II. In an effort to secure the borders of his lands he had a number of guard castles built in territories where ownership was a matter of dispute. Thus, on one of the trade routes – directly opposite an older castle of the same name (Landstein) which belonged to the Austrian Lords of Zöbing – he founded the royal castle of Landštejn. The fortress was meant to guard and protect not only the “interstate” trade route, but also a part of the border between Bohemia and Austria. After the middle of the 13th century the castle was passed from the hands of the ruler and acquired by the family of Witkonids (Vítkovci). One of their branches, with a coat of arms displaying a silver rose on a red shield, took the title “of Landštejn” and as Lords of Landštejn soon became one of the most powerful houses in the kingdom. During the reign of Vilém (William) of Landštejn this house controlled – besides Landštejn – also Třeboň (Wittingau), Lomnice (Lomnitz), Nové Hrady (Gratzen),  Hluboká (Frauenberg), Trhové Sviny (Schweinitz) and Borovany (Forbes). Because of his political ambitions Vilém of Landštejn got into a disagreement with the king Jan Lucemburský (John of Luxembourg), who marched at the head of his army to subdue the revolting noble. However, with the active help of his uncle Petr (Peter) of Rožmberk, Vilém made the royal army retreat and leave his demesne, and in 1318 both he and Petr made peace with the king and became his faithful and loyal supporters, whose service was also rewarded with a number of extensive privileges. King Karel (Charles) IV, Jan Lucemburský’s son, also appreciated Vilém’s support, sending him on various diplomatic missions, and in 1351 he finally decided to appoint Vilém to the prestigious post of Burgrave of the Prague Castle. 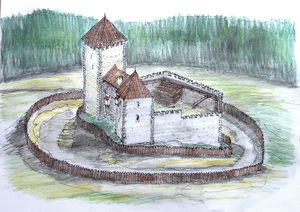 The old trade route, which ran directly under Landštejn, brought the Witkonids great wealth and riches. Since the beginning of the 14th century the Lords of Landštejn were embroiled in a dispute with their relatives and neighbours, the Lords of Hradec, regarding its course. The resulting animosity peaked in the middle of the same century in an open war between Vilém a Jindřich (Henry) of Hradec, who decided to change the course of the route. In spite of repeated intervention by Karel IV himself, their mutual hostility eventually led to a duel. During the ensuing fight with Jindřich Vilém was mortally wounded, and shortly after one of the most powerful men in the kingdom died in Landštejn in April 1356 – his death also marking the end of the most glorious times the house of Landštejn ever saw.

In 1381 King Václav IV (Wenceslaus IV) gave Landštejn to Konrád Krajíř of Krajk (Konrad Kraiger von Kraigk). Krajíř’s family had Austrian (Carinthian) roots but became established in the Kingdom of Bohemia soon enough. In the early 15th century the Krajířs got involved in the Hussite Wars – on both sides of the conflict. Konrád’s son Lipold (Luitpold) fought the Hussites together with the Catholics as the commander of the garrison in České Budějovice, loyal to the Emperor Zikmund (Sigismundus). In retaliation, Jan (John) Žižka, the famous Hussite leader, burnt Lipold’s castle in Bystřice (Bistritz), captured his wife and children and eventually attacked Landštejn itself. Lipold’s son Volfgang (Wolfgang) gravitated towards the side of the Utraquists. The Krajíř family imbued the stark Gothic castle with Renaissance-style comfort and lifestyle. The last living member and heir of the family heritage, Anna, married Roupovská (of Roupov), sold the castle to the hereditary High Chamberlain of Austria, Štěpán of Eizing (Steffan von Eyczing). In the following period the castle quickly changed hands several times, was not used for permanent residential purposes any longer and became a mere centre of land administration.

In 1771 the great tower was struck by a lightning and the subsequent fire caused serious damage to the residential parts of the castle. The castle was left to its fate, quickly started to decay and served as a welcome source of construction material for the surrounding villages. Eventually, it became a romantic ruin – a favourite destination of trips organized by the patriotic Club of Czech Tourists (Klub českých turistů).

In 1945 the castle was nationalized and in 1948 it was assigned to be used by the tourism department of the Czechoslovak Sokol Community (Československá obec sokolská). In 1954 it was put under state administration.

The year 1972 saw the beginning of extensive renovation and conservation of the decaying stonework, which gave the castle its current appearance and made it possible to open Landštejn Castle to public in 1990.